‘Pulses Panchayat’: It takes a village to change the country 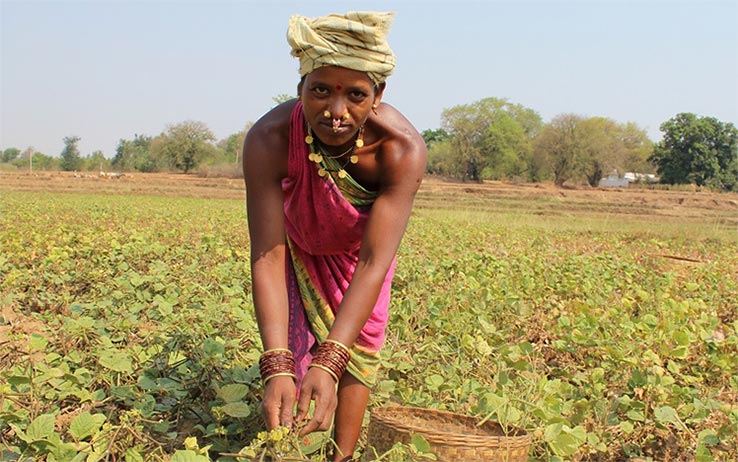 This article originally appeared on icarda.org.

Urmila Pujari belongs to the Bhumia tribe of eastern state of Orissa in India, a culturally rich and one of the largest tribes in India. The tribe practices agriculture as its primary occupation, with very few farmers cultivating pulses (food legumes). Urmila’s village of Bhejaguda is one the 28 tribal villages that has been brought into the folds of ‘Pulses Panchayat’, a bold and innovative movement that aims to revolutionize India’s pulses production.

India’s pulses sector has been much in news this year with soaring pulses prices, making this staple food and major source of nutrition unaffordable for millions of people. The crisis was an alarm bell, warning the country of its increasing dependence on pulses imports to keep up with the demands of a growing population and a languishing domestic pulses supply. Its pulses imports reached 4.5 million tonne in 2014-15, costing the nation US$2.8 billion.

Pulses production in India faces a number of constraints, including no major advances in production technologies, pests and disease, poor access to timely inputs, inefficient storage, and lack of market linkages and institutional support.

Pulses Panchayat could be the sweeping solution to all these challenges.

The first-time ever approach, implemented by M. S. Swaminathan Research Foundation (MSSRF), an NGO in India, in partnership with local actors and backed by ICARDA, is aiming to bring clusters of entire villages under pulses production by mobilizing collective commitment and action from farming communities. Using the model of “panchayat” or village self-governance with the interest of farmers at the heart of it, the initiative is aligning all players in an “orchestrated symphony” to establish sustainable pulses production, value chains and marketing systems to foster pulses self-sufficiency.

Urmila is part of this movement that is gaining ground, converting one village at a time, bringing nutrition and increased incomes to families, promoting climate-smart agriculture in communities and putting India on track for large-scale increases in pulses production.

From sowing to harvesting

The power of unifying

Farmers are organized into Farmers Producer Organization (FPO) to standardize the pulses supply with high quality grain that is graded and bagged to match the market demand. A single point of contact within the FPO handles all transactions with the bank collectively for all farmer members, adding efficiency and accountability. Further, an elected farmer committee represents all farmers in liaising with organizations, such as research centers and local and state authorities. And FPO also functions as an entry point for building the capacity of entire farming communities, imparting business kills such as book keeping, awareness on nutrition and sustainable farming, and training on production technologies.

The results so far

The current average yield in India has stagnated at 0.75 tonnes per hectare (t/ha).

Urmila was able to reap an impressive yield of 1.3 t/ha of green gram — enough to feed her family, increase nutrition in their diet, and sell the surplus to market. Living on an annual household income of US$2800 per year with her husband and three children, the gain had a substantial impact on family income. Also sowing pulses after rice improved soil fertility, which reduced the use of chemical fertilizers like urea and ammonium nitrate that pollute the environment.

Overall, the participating villages in Orissa generated close to US$150,000 worth of business with selling of pulses. Groundnut alone has been reaping an extra income of US$180 per household in the state.

Earning the trust of tribes is not easy, which was perhaps the biggest achievement of the approach. Most farmers were growing finger millet with very little legume cultivation at the start of the project in 2012. The project convinced 667 households to grow 400 acres of groundnut and 300 acres of black gram and green gram, paving the way for more villages to follow suit and grow pulses.

Stepping it up: a vision for Pulses Bio-Park

The initiative is engaging policy-makers to institutionalize Pulses Panchayat under the framework of India’s National Food Security Mission, so the movement can take root for large-scale impact — reduced imports, sustainable use of rice fallows, and greater nutrition and incomes for farmer families. In parallel, MSSRF is working to step up the village-level panchayat concept to a more market-driven model of Pulses Bio-Park that serves clusters of 10-12 villages, providing farming communities with access to facilities, such as seed production units, grading and harvest machines, and linking them to markets, with start-up support from lending banks such as the state-run National Bank for Agriculture and Rural Development.

On road to self-sufficiency

It may take a village at a time for India to become self-sufficient in pulses. And Pulses Panchayat is determined to do so.

The initiative aims to achieve national self-sufficiency by 2030, which will require additional production of 14 million tonnes. Experts estimate an additional growing area of 3 million ha, which can be tapped from cultivating fallow lands. However, the low-hanging fruit is bridging the yield gap through improved technologies, which can double the yields up to 1.4 t/ha. The project has been successfully piloted in states of Tamil Nadu and Orissa.

Can this model be adapted to other countries?

The Pulses Panchayat project is already providing for learning through a South-South collaboration — the India Morocco Food Legumes Initiative (IMFLI), which is funded by Morocco’s OCP Foundation and brings partners in India and Morocco together for their mutual goals of increasing pulses production.

As 2016 International Year of Pulses comes to a close, the goal of increasing pulses production and consumption, particularly in developing countries, has found a champion in Pulses Panchayat, with the potential to improve food and nutrition security for millions and restoring degraded soils.

The 'Pulses Panchayat' project is funded by OCP Foundation.