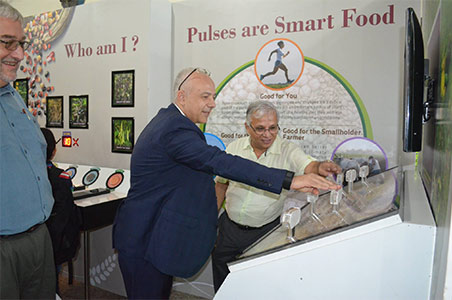 The acclaimed Nehru Science Centre in Mumbai, India is hosting a packed exhibition with a series of educational activities to help raise awareness of the contribution of pulses to food security and nutrition among its thousands of visitors.

“The Future of the Food: Pulses" exhibition is being organised to mark the International Year of Pulses 2016 celebrations and will run from September 15 to November 30.

India is both the world's largest producer and consumer of beans, dry peas, chickpeas and lentils. The centre hopes the exhibition will leverage awareness of the nitrogen-fixing properties of the crops and their importance in creating sustainable agricultural systems and a healthy planet.

The exhibition will also showcase the many health and nutritional benefits of pulses, including positioning pulses as an important source of protein for the future.

The Nehru Science Centre in Mumbai is a constituent unit of the National Council of Science Museums an autonomous scientific institution under the Ministry of Culture, Government of India. Since its inauguration in 1985, it has become one of the most visited science centres in the country, which is visited by more than 750,000 visitors annually which include close to 300,000 school students.