The US LovePulses Product Showcase Competition present its winner! 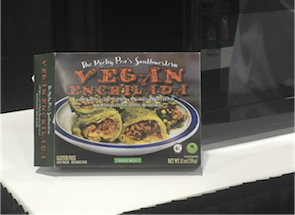 How creative can you be with beans, peas, chickpeas and lentils? The United States LovePulses Product Showcase has shown that is possible to create some incredibly delicious dishes.

Tasked with making a mainstream, freezable produced based on traditional Rocky Mountain/South West regional cuisine from the United States of America, students from Canada, Malaysia and the USA have been busy in the kitchen, delivering some mouthwatering ideas ready to be served a plate. Below is a snapshot of those shortlisted.

The top 6 teams competing in the Student competition were:

A gnocchi made with green lentil flour and potatoes, with a fiery black bean, lime, and apricot cream sauce. (University of Guelph)

Following a thrilling competition, the Spicy Linguine Roulade De Pollo was declared the best dish. The Gnocchi Mountain Vension and Southwestern Vegan Enchilada from US universities (2nd and 3rd place, respectively) will be forwarded to represent the USA in the Global #LovePulses Global Development Showcase at the Institute of Food Technologists Conference in July later this year.