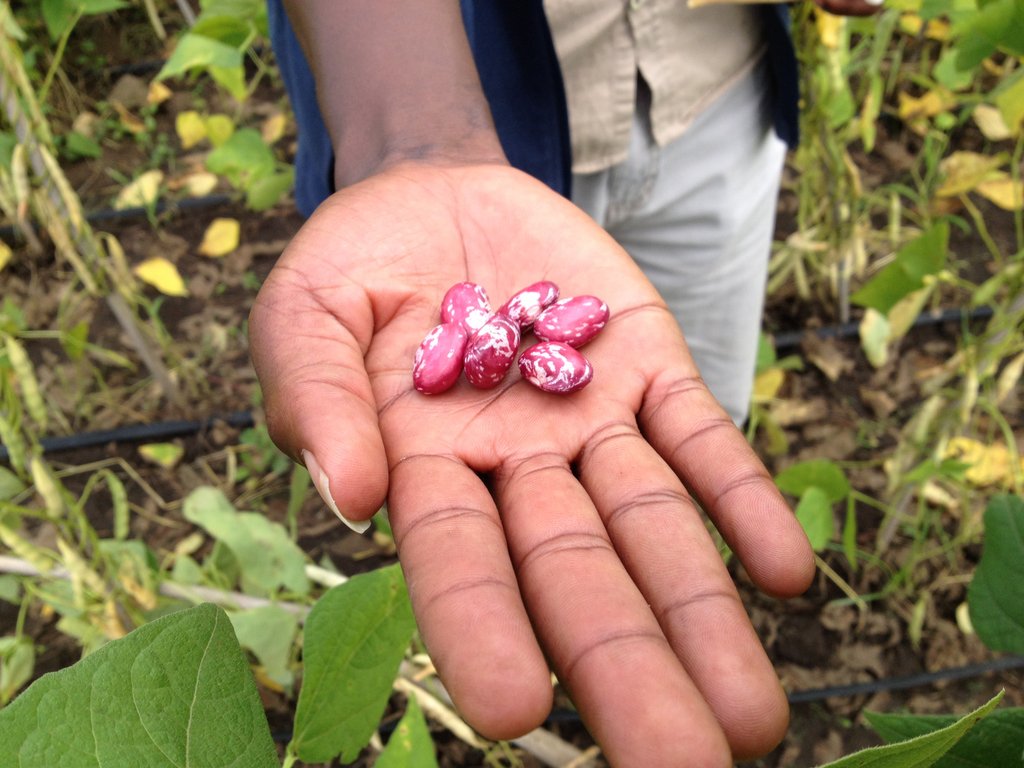 Papias Binagwa is a Cohort III student funded by iAGRI who completed an M.Sc. degree in Plant and Soil Sciences at Tuskegee University. Papias wrote his M.Sc. thesis on Evaluation of Common Beans (Phaseolus Vulgaris) Germplasm for Resistance to Pythium Root Rot Disease and has continued to specialize in both bean breeding and pathology. Today, he serves as National Lead Scientist for the Phaseolus Bean Research Program under the Ministry of Agriculture, Livestock and Fisheries. In the following, he describes his experiences working with the common bean and his plans to contribute to Tanzania’s bean sector.

“Tanzania supplies a lot of beans to bordering countries. We’re ranked first in Africa for bean production and 7th in the world,” stated Papias. Over 75% of rural households in Tanzania depend on beans for daily consumption. The common bean is also an important source of protein for low-income families providing approximately 38% of protein and 15% of daily calorific requirements.

“I chose to research root rot in the common bean because it causes up to 70% of yield losses in commercial bean cultivars in eastern Africa. At the same time, it’s the third most commonly eaten staple crop in Tanzania after corn and rice. For such a heavily consumed crop, common beans are directly linked to the food security in Tanzania.”

Papias’s M.Sc. degree included a stay in the United States at Tuskegee University at their College Of Agriculture, Environment and Nutrition Sciences. “I received an email stating that I was accepted to study at Tuskegee University in 2013. When you tell people you studied in the U.S., they can’t believe it. It’s hard to imagine coming from a rural area and studying in public schools in Tanzania and then getting an opportunity to pursue a university education in the U.S.”

His stay in the U.S. was particularly relevant for his research on how root rot affects bean plants and possible pathways to resistance. On the suggestion of his supervisor, Conrad Bonsi, Papias trained in classical pathogen isolation and DNA extraction at University of Nebraska Lincoln Alfano Lab based in their Center for Plant Science Innovation. “The hard sciences are so complex. It demands modern laboratories, equipment, and greenhouses,” he explains. “Really, whatever you want to do, you can perform at these labs.”

“When Papias started his research at Tuskegee University I knew he would perform well” explained Susan Nchimbi-Msolla, his supervisor and Dean of the Faculty of Agriculture at SUA. “He was emailing me to ask many good, insightful questions about root rot disease in beans. I responded to his questions and I also gave him contacts of prominent bean researcher in the U.S. and the International Center for Tropical Agriculture.”

At Tuskegee, Papias excelled at courses in soil microbiology, bio-statistics, integrated pest management, plant pathology and plant breeding. He attended a Legumes Innovation Lab workshop in South Africa in July 2015 and had the opportunity to present his work and discuss with other leading bean researchers.

This assertiveness not only impressed his supervisors, but opened doors for research opportunities. “Even at the level of a first year M.Sc student, he was able to contact prominent bean researchers without hesitation. Because of this, he was able to get the information he need including the germplasm for his research,” added Nchimbi-Msolla.

The combination of his work on path pathology and breeding prepared him for more senior roles upon his return to Tanzania. At SUA, Papias continued his research and complemented his academic achievements with training in soft skills through iAGRI’s leadership seminar. The leadership seminars equipped me with significant leadership skills in my working environment,” explained Papais. “We’re not only training scientists in a technical capacity, we’re also training them for the human dimension to be visionary leaders,” added iAGRI Director, David Kraybill.

“The leadership webinars equip students with the training to handle the human dimension of research – team building and conflict resolution – as well as skills such as goal-setting to prepare them to be visionary leaders in their respective fields,” explained Kraybill. “Our goal is to have 80-90% of iAGRI students attend at least one leadership seminar,” he added. “The outcome of the leadership seminar training is becoming evident. It’s really impressive,” stated Isaac Minde.

His adviser at Tuskegee echoed the sentiments of staff at iAGRI. “I am not surprised by the accomplishments and achievements of Papias – both as a scientist and a leader. He was an exemplary student who took nothing for granted and worked very hard. He was innovative, persistent and exhibited skills crucial for a very successful career in scientific research in years to come. We at Tuskegee University are so proud of him and his achievements.”

In addition to his work on common beans, Papias has also pursued other professional development and community engagement opportunities. He attended a seminar on Agricultural Mechanization in China, expanding his network and gaining exposure to additional areas of research. Upon returning to Tanzania, he volunteered at the Muyenzi and Kibogora Secondary Schools teaching chemistry and biology.

His word of advice to students pursuing agronomy is: “Agriculture is a good industry to work in and I really benefited from the support and mentoring I received from USAID through iAGRI. You can’t succeed on your own. You need to cooperate with others,” states Papias.

As Country Lead Scientist for Phaseolous Bean Research, Papias will not only be responsible for managing a core staff of 17, but also for breeding beans that are resistant to diseases with commercial varieties to produce cultivars that are ideal for the Tanzanian market. “The beans have to be not only nutritious, but also respond to market demands,” added Papias. Currently, he is testing the adaptation of climbing bean varieties such as MAC 44, MAC49 and MAC09 with high zinc and iron that will be used to target pregnant women, children and vulnerable groups.

As an emerging leader in the field, his training connects across disciplines and issues covering bean breeding and pathology. The combination of his training, research capability, and interpersonal skills will be critical to his future contributions to the field.