This article originally appeared on the ICARDA CGIAR website. 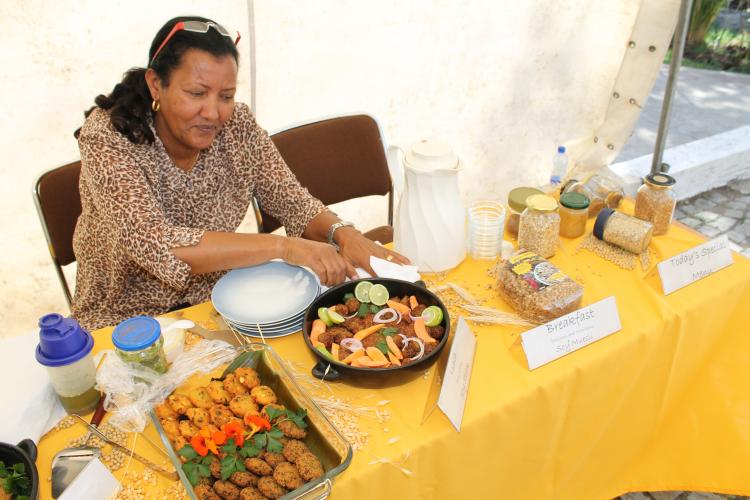 Wondering if pulses have limited place in foods?

Mrs. Alem Greiling proved anything is possible with pulses at the LovePulses Product Innovation Competition in Ethiopia, held this week on January 25, 2016. Winning the national competition held as part of 2016 International Year of Pulses (IYP 2016), Mrs. Greiling showcased six new nutritious and delicious pulse-based products as ‘special menu’ of the day, starting with breakfast, lunch, snack, right up to dinner.

Dishes were created using chickpea, pea and soya with other locally available ingredients such as moringa, sesame, and honey to prepare soy-based cereals and pancakes for breakfast, soy steak for lunch, and soy sprout salad and ‘meatballs’ of chickpea and spiced pea for dinner. In addition, attendees enjoyed sampling Soy Power Bars that can be consumed as a midday snack.

The LovePulses Competition, held at the Ethiopian Institute of Agricultural Research (EIAR) headquarters, was jointly organized by EIAR and ICARDA to raise the profile of pulses both in the kitchen and on farmers’ fields.

(See photos from pulses competition and feasts hosted by ICARDA)

Highlighting the importance of pulses for the country, Dr. Mengistu stated that “Ethiopia is a major producer of pulses in sub-Saharan Africa and the crops play an important role in the farming systems.” He pointed out that pulses are contributing to food and nutritional security, and income generation for close to 8 million smallholder farmers who cultivated these crops. These are crops for diversification, intensification and sustainability of agriculture, and generate foreign exchange revenue as export commodity for the country.

EIAR has developed and released several improved legume varieties and technologies, working in research partnership with CGIAR centers like ICARDA, which are in the hands of farmers increasing production and productivity, and changing livelihoods of farmers in the country.

Dr. Zewdie Bishaw, heading Seed Unit at ICARDA and based at the center’s research platform in Ethiopia, pointed out that even though pulses offer a unique combination of food and nutritional security and environmental sustainability when compared to the ‘three big cereals’- maize, wheat and rice, the area planted with pulses globally are a pale comparison to area covered with these cereal crops. Pulse yields and production have been stagnant in the developing countries over the past few decades. “Agricultural research and development in many of these countries are concentrated on cereals while pulses lag behind in terms of area expansion and productivity gains,” said Dr. Bishaw, calling for greater focus on pulses research.

Following the opening remarks, the contestants presented their LovePulses product creations amidst excitement and anticipation with a panel of leading experts called in as judges – former senior chefs from Hilton and Sheraton hotels, head of Health and Nutrition Research Institute, and experts from food and beverages industry, EIAR and the Ministry of Agriculture and Natural Resources.

All participants were recognized with certificate of participation while Mrs. Greiling’s products have the opportunity to be globally showcased at the Institute of Food Technologists in Chicago on July 16-19 and possibly at other IYP 2016 events.

The elaborately planned event stirred national attention and received wide media interest, thanks to the efforts of the event organizing committee chaired by Dr. Fikre from EIAR with members from EIAR and ICARDA staff.

Ethiopia is one of the several countries participating in the LovePulses Competition being held nationally and virtually this year.