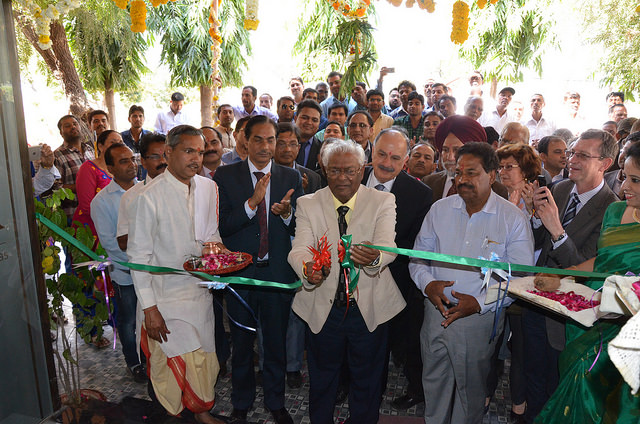 ICARDA launched the Global Pulses Research Platform near Bhopal in Madhya Pradesh state, India, yesterday on February 24, 2016. The Platform was inaugurated by guest of honor, Dr. Sanjaya Rajaram, World Food Prize laureate and renowned agricultural scientist. The Platform, managed as a partnership of ICARDA with the Indian Council of Agricultural Research (ICAR), the State Government, and the Government of India, aims to boost the region’s pulses production significantly and reduce dependency on import.

In India and South Asia, pulses have traditionally been a major and often the only source of affordable protein and vital nutrients for the poor and malnourished population. Currently, India is facing soaring prices in pulses as the country is increasingly becoming dependent on expensive pulse imports, which reached 4.4 million tonnes in 2014-2015 – up by 29 percent over the previous year, according to the India Pulses and Grains Association.

“Establishment of the Platform and its collaborative research with ICARDA, ICAR institutes and State Agricultural Universities will certainly contribute to closing the gap between India’s demand and supply of pulses,” said Dr. Trilochan Mohapatra, the newly appointed Director General of ICAR, at the official inauguration of the Global Pulses Research Platform yesterday. “The South Asia region as a whole will profit from its research products and innovations,” he added.

“Key strategies of the research platform are to benefit pulses producers while enhancing nutritional security and sustainability of cropping systems,” stated Dr. Mahmoud Solh, ICARDA’s Director General. “The platform will not only invest in the necessary research for new pulses technologies but also build the capacity of local scientists, extension workers and farmers.”

Dr. Solh called pulses “climate smart crops” because they contribute positively to soil health. Pulses will need an enabling policy environment to meet the current and future challenges as their consumption is estimated to increase by 23% in the next 15 years. “The establishment of the Global Pulses Research Platform is a step in the right direction,” Dr. Solh concluded.

The Global Pulses Research Platform is spread over 71 hectares of experimental farmland and equipped with supportive high-quality research facilities. A major research approach is tapping rice fallows to grow higher yielding, early maturing pulses varieties of lentil, chickpea and grass pea. In India, approximately 11.7 million hectares are left fallow every year for up to six months after the rice harvest, of which pulses can be successfully produced in at least 3.0 million hectares. Grown in rice and rice-wheat systems, pulses are sustainably increasing cropping intensity, generating additional revenue for farmers and ensuring nutrition security for families.

The platform in India complements ICARDA’s crop research facilities in Morocco and Ethiopia, putting pulses research on an accelerated track for the developing world.

ICARDA’s platform is in lock-step with the UN’s declaration of 2016 as the International Year of the Pulses aiming to promote pulses production and consumption the world over, particularly in developing countries. With a multitude of benefits, pulses address both malnourishment and soil degradation – the major challenges facing countries in Asia and Africa.

For more information, please contact Andrea Gros, ICARDA Head of Communication at This email address is being protected from spambots. You need JavaScript enabled to view it.