The Magical Portuguese Soup of Stones 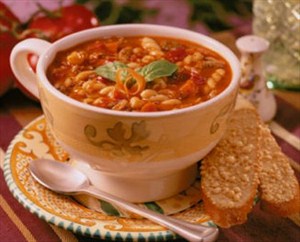 Almeirim is a small town in Portugal famous for its good melon, wine, tomatoes, and the famous soup…of stones. Although there are many variations of the recipe, this soup is still prepared in this town in Portugal not only by the local people, but also by restaurants, who consume a total of 12,000 kilograms of beans per month.

But don’t be fooled by the name, this soup does not consist of stones nor will it leave stones in your kidneys. The name of the soup actually comes from the legend behind it.

Once upon a time in Portugal, there was a very poor friar who was embarrassed of asking for food or money. Clever he was, and with a stone in his pocket he knocked in some villager’s door saying “Hello good fellow, I have a magical stone that can make the most delicious soup ever tasted, would you like to try it?”. The skeptical villager was about to close the door in his face, but was also curious about the stone. The friar offered to cook the soup and to give him a taste of it if he had access to the kitchen. Despite thinking that the friar was a bit nuts, the villager lent him a pot, water and a ladle.

The villager stood close to the friar waiting to see some magic, while the friar began to ask for some ingredients: “My dear fellow, this soup could use some vegetables, do you happen to have a carrot, some potatoes, onion and celery?” to which the villager replied, “well of course, we grow our own vegetables here, let me get you some”. The friar added the vegetables and asked again, “well this is almost ready, we just need some meat and beans, if you have that, then the soup will be perfect”. The proud villager replied, “No worries father, of course we have that in the house!” The friar continued stirring the soup and the villager stood next to him more curious than ever. Finally the friar said “Is almost done, but we need some salt, pepper and perhaps some fresh herbs, you don’t happen to have some, do you”. The villager who was getting very impatient went to get the requested ingredients.

After the friar added the meat and beans and let it simmer for a couple of minutes, the friar tasted the soup and finally declared “The stone has done its magic! This soup is the most delicious ever tasted! Please try it!” The villager took a big spoon and was very pleased with it, so much so that he asked the friar to sell him the stone. The friar declined and continued his pilgrimage with the stone in his pocket, knocking on others people’s door, ready to prepare them the “Magic Stone” soup.

Get ready for the Portuguese International Year of Pulses 2016 signature dish! Run to the nearest garden, park, or beach and get a stone…the recipe will be coming soon on November 10, with the launch of Pulses.org on November 10th.