Chef Michael Smith, one of Canada’s best-known chefs and the national ambassador for the International Year of Pulses. He is a passionate advocate for simple, sustainable home cooking and an inspiration for families creating their own healthy food lifestyle. He’s the host of Chef Michael’s Kitchen, Chef at Home and Chef Abroad seen on Food Network Canada and in more than 100 other countries. He’s a judge on Chopped Canada and traveled the world for his innovative web series, Lentil Hunter.

Chef Michael and his wife Chastity are the proprietors of The Inn at Bay Fortune on Prince Edward Island. They’ve relaunched the property where Michael gained international fame in the 1990s with a new spirit of five-star hospitality and an innovative dining experience, the FireWorks.

While Michael is a true chef at large his favourite role is Dad, at home on Prince Edward Island with his wife Chastity and his children: Gabe, Ariella and Camille! Michael is an avid map collector, long-time windsurfer and novice kite sailor. 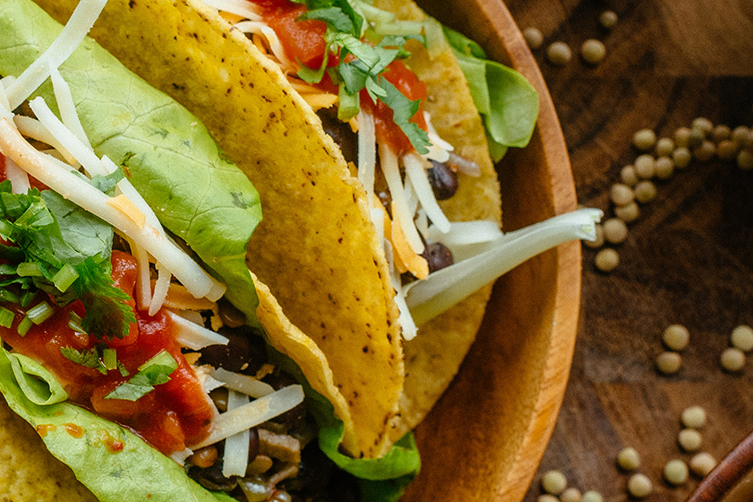 The year 2016 has been declared the International Year of Pulses by the United Nations to celebrate one of the world’s most important foods: the edible seeds of the legume family. Beans, peas, chickpeas, and lentils are packed with fibre, protein, nutrients, and flavour. Their nutritional intensity, inexpensive accessibility, and ease of cooking have made them indispensable staples to cooks all over the globe.

Wherever we live we all do our best to make healthy choices at home but it’s a lot easier when those choices are delicious. These meatless tacos are stuffed with so much sunny southwestern flavour that no one will notice anything missing. What a great way for your family to join families around the world in a global celebration of flavour and nutrition!

For the pulse filling

For the taco toppings